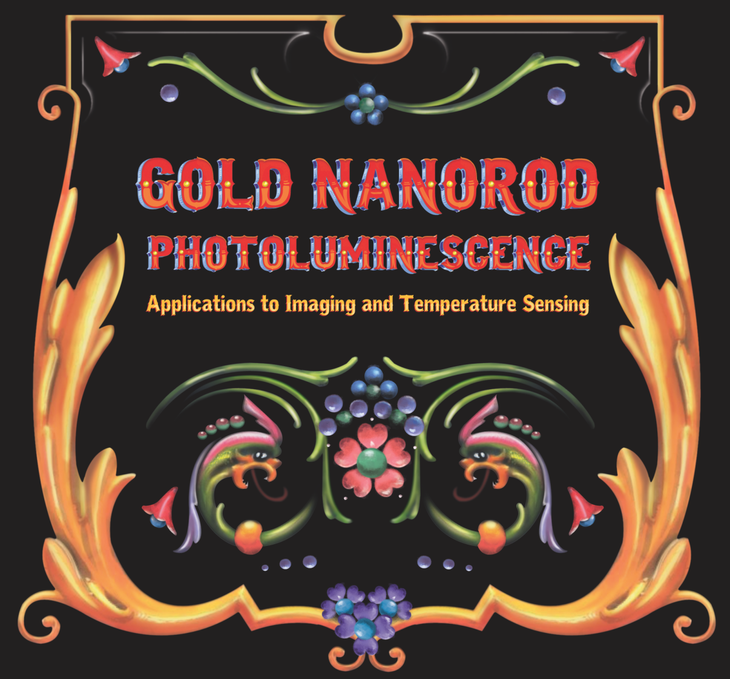 Between October 2012 and March 2017, I worked at Prof. Michel Orrit lab in Leiden, the Netherlands. My work focused on the understanding of a phenomenon known as luminescence, originating from small objects called gold nanorods. When excited with a laser, gold nanorods emit light at different wavelengths. This property is also present in fluorescent molecules. Still, their main difference is that molecules can emit light for short periods.

In contrast, metallic nano-objects can emit light virtually forever. One possible application for these objects is in biology. In crowded environments such as a cell, it is common to label interesting objects with something that can emit light. In this way, researchers can see and distinguish these objects from others.

The Ph.D. thesis that resulted from the years at Leiden has four different scientific chapters, focusing on various aspects of the metallic particles. 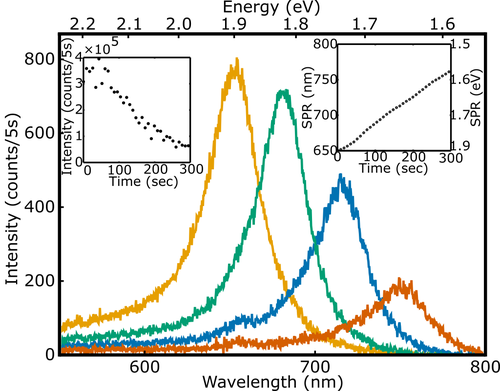 Metallic nanoparticles are synthesized in chemistry labs, leading to a broad distribution of particle sizes. In turn, it generates particles with different optical properties. For experiments where the particles are immobilized on substrates, it is desirable to tune the optical properties after they have been manufactured. The first chapter looks into how it is possible to use Potassium Cyanide to change the shape of particles. We tracked the optical properties of the particles over time and find out that they reshape isotropically. It means that they are not shrinking proportionally, but that they get smaller both from the tips and the sides equally fast.

This result is in sharp contrast with what is observed for particles in suspension. When particles are floating around a liquid, and potassium cyanide is introduced, the particles reshape into spheres, meaning that the tips are more exposed than the sides. We confirmed the results by electron microscopy as well as by comparing them with simulations. This astonishing difference made us conclude that the surfactant used to prevent particles from aggregating while in solution plays an active role in protecting the particles. This result is significant also to understand other types of chemistry that are performed on particles, such as functionalization, and exploit the fact that the tips are more exposed.

Side note: to perform this experiment, I had to develop custom software that was able to acquire spectra of particles while they were reshaping. This experiment was the kick-start that eventually leads to the creation of Python for the Lab.

More info in the publication.

The advantage of using gold nanoparticles for imaging is compensated by the fact that they are much less bright than molecules. The amount of laser light that needs to be shone to get enough photons out of them is much higher than for molecules. When the laser intensity is high enough, there is another problem that arises: the background signal is higher due to the auto-fluorescence of the medium itself. However, particles have another distinguishable feature that is not common in molecules: emission at higher energies than the excitation energy.

When we shine a molecule with light, some of the received energy is lost as vibrations. When the molecule gives the energy back in the form of photons, they have slightly less energy than the photons with which we started. This process is known as the Stokes-shift and is useful to filter the excitation light from the emission light. Nanoparticles, however, show emission not only at lower energies but also at higher ones. This phenomenon is harder to explain, but real. In this chapter, I exploited the anti-Stokes luminescence of the particles to image them even in high background conditions.

More info in the publication 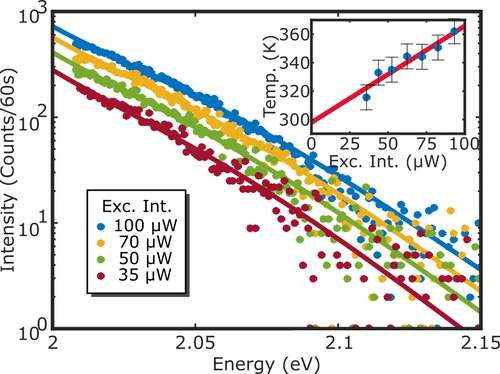 Imaging gold nanoparticles using the anti-Stokes luminescence was interesting, but there was still much more to do. The biggest question we had was how come that these particles are so efficient at emitting light at higher energies than the energy we provided. Even if it sounds to a violation of thermodynamic principles, emitting light at higher energies is possible and observable in many situations, if one considers that the objects are hot. Particularly nanoparticles absorb so much light that they warm-up, even to the point of being able to boil the water around them. The power that the particle can dissipate through the emission of photons is virtually negligible. It is possible to think of a mechanism in which thermal energy is transformed and given back to the particle before emitting a photon.

There is no clear picture of how the particles emit light. At least, no complete description that explains all the observed properties, such as spectrum, quantum yield, lifetime, temperature dependence, etc. But the overall principles are more or less known. We can model the thermal excitation of the nanorods as particles (called phonons) with given distribution energy. On the other hand, the electrons get excited when we shine a laser on the nanorod. If an electron meets a phonon and collide, there is a chance that the electron will gain energy before relaxing emitting a photon. For molecules, this process is so unlikely that anti-stokes emission is rarely observed. For gold nanorods, it seems to be the opposite, which cases in which anti-Stokes emission could become brighter than Stokes emission.

Once the phenomenon could be described, the next logical step was to extract information out of it. The model we proposed had only one free parameter, which was the temperature of the particle—the hotter the particle, the more emission at higher energies. To be able to verify it, we built an accessory for the microscope that allowed us to increase the temperature up to 60 degrees. We could track the changes in intensity and spectrum over a wide range of temperatures and excitation intensities. We could compare the results with the model and also show that the anti-Stokes emission can be used to measure the temperate of the medium with very high spatial accuracy.

More information in the paper 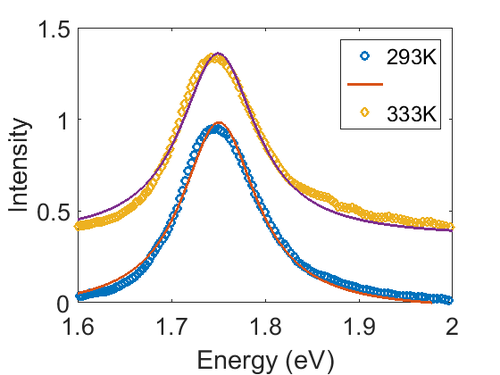 The observations were conclusive, but the lack of a proper model to understand them and the lack of time to pursue it didn't allow for this chapter to be published. It is, however, a fascinating result that could have applications in temperature sensing or tuning. The effect is, however, relatively small as to have an impact on other phenomenons already studied, such as the anti-Stokes emission or pulsed experiments.

Topics that didn't Make the Cut

There were three main topics that I pursue during the Ph.D., but that didn't make it to the thesis itself.

The original research plan was to focus on the use of Optical Tweezers to manipulate objects at the nano-scale. In principle, once you trap a nanoparticle, you can use it to probe the surroundings. It is not only a matter of moving it but also of sensing forces. You can push it against a membrane, for example, and measure how stiff it is. However, trapping gold nanoparticles is very time consuming and integrating them on other microscopes is more of an engineering challenge than a research challenge. However, they also opened other opportunities that were worth pursuing

The group had experience with fluorescence enhancement. When a molecule goes through the vicinity of a nanorod, there is an antenna effect that makes the particle emit more photons. Better said, to emit photons quicker. It results in brighter molecules that are easier to observe. However, these experiments have a limitation because molecules stick to the surface, and thus the range of applications is limited. Repeating the experiments with suspended nanoparticles would overcome these limitations, finally opening the door to high-concentration fluorescence correlation spectroscopy.

The challenge in this idea is that the near-field of the particles is rather small, and molecules diffuse rather quickly. Therefore, identifying the emission from single-molecules going through the tip of the rods was not at all trivial. Preliminary results showed that there might be some signal arising from the trapped particles, but it was not conclusive. There are so many factors at play, such as the temperature gradient generated by the particle, the movement of the particle itself, the viscosity, etc. that drawing certain information would have been very challenging.

Photothermal imaging is a technique in which two lasers are involved. The first one warms up a particle with a periodic pattern. The second one can sense the changes in the refractive index generated by the heat of the particle. This technique is susceptible to alignment and was, therefore, an ideal candidate for testing the alignment of the two beams needed for the fluorescence enhancement in trapped nanorods. Photothermal allowed us to explore a wealth of information of the trapped particles, such as dependence with polarization, and stability of the trap. However, photothermal became a tool more than a result in itself.